Home Blockchain ‘The next BitMEX’: the Aussie project up 3400% this year

It’s being touted as ‘the next BitMEX’ and this Aussie crypto project now ranks at 38 on CoinMarketCap – above Nano and OmiseGo.

It has seen explosive 60x staking growth since launching in April, and now has $137 million locked up.

If it can maintain this level of growth it won’t be long before its nipping at the heels of defi leader Maker (behind the stablecoin Dai) which has $340m locked.

To put that all in perspective, the much bally-hooed Lightning Network has just $6.8 million locked up.

SNX heads to the moon

The secret is definitely out, with the Synthetix Network Token (SNX) shooting up from its all time low in January this year above 3 cents, to hit its current $1.15 price.

That’s an astonishing 3400% increase in 11 months (and full disclosure, the author bought some back in April after reporting on the project for Micky for the first time).

CoinMarketCap now ranks SNX number 38 on its list of cryptocurrencies – above Holo, Nano and OmiseGo – with a marketcap around $168 million. A couple of weeks ago it wasn’t even in the top 50. 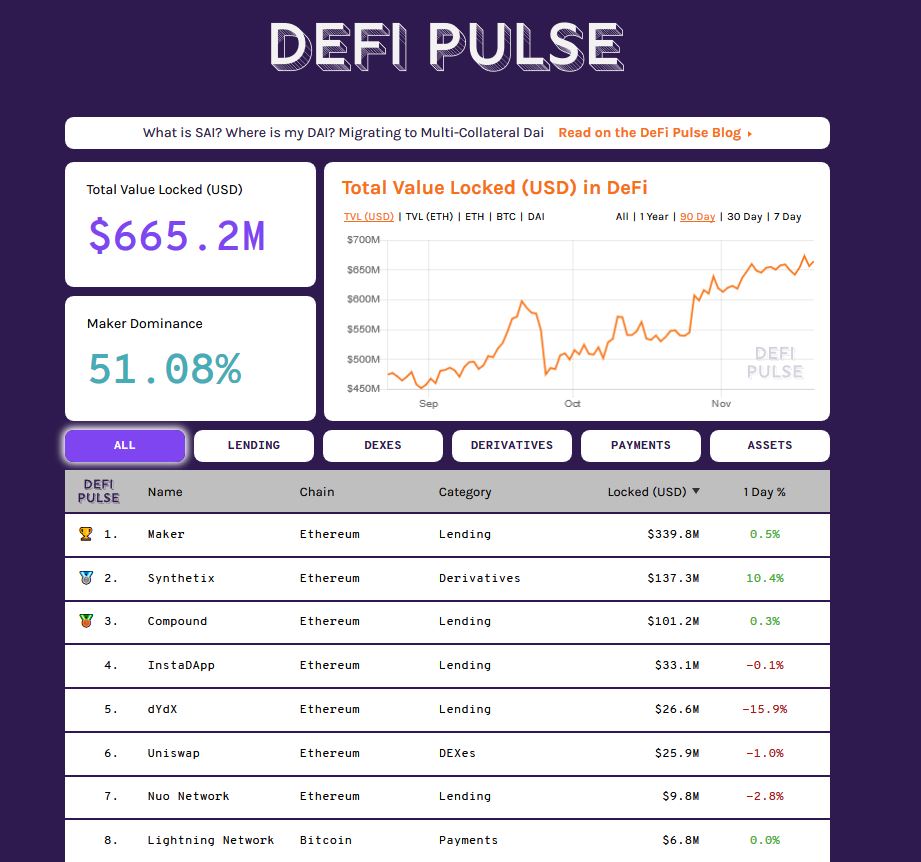 Synthetix is a complicated (and fairly risky) project, but at its simplest it’s a decentralised exchange that allows users to stake for rewards and to trade in synthetic assets and derivatives – which are tokens tied the value of real assets.

So if Bitcoin increases in value, so does synthetic Bitcoin – but because it’s not actually Bitcoin you don’t have to worry about price slippage when you buy it, or getting someone to fill your order.

Synthetix offer derivatives like inverse Bitcoin, which enables users to short Bitcoin simply by buying a synthetic token, and there are plans to have synthetic versions of equities such as Apple and Uber stocks.

The team have just revamped the Mintr dapp, which allows users to stake their SNX and mint a stablecoin (SUSD), and have integrated it with Coinbase Wallet to enable users to do this while on their mobiles.

And they’re working on a way to allow users to stake Ethereum, with rewards going to SNX holders.

Opening the platform up for Ethereum staking is likely to make it considerably more popular, as a lot more people want to stake Eth than SNX.

You can now mint assets like synthetic gold, USD and BTC straight to your phone with the @synthetix_io Mintr and Coinbase Wallet ????‍♂️

Check out this magical experience ???? https://t.co/PLrb8KEDHF

“If Synthetix can scale a balanced book, SNX becomes an infinite liquidity pool that can mint any asset with a reliable data feed against the collateral pool,” he wrote. “In the near term, this looks like a decentralized version of BitMEX.”

Spencer wrote that in traditional markets, derivatives are much more popular than shares and have been estimated to be wroth 10x global GDP annually.

“In crypto, we are seeing similar dynamics play out with the success of BitMex and its perpetual swaps dwarfing corresponding spot markets.

“Our belief is that a non-custodial, decentralized, infinite liquidity version of BitMex would achieve product-market fit at scale.”

It’s worth taking a reality check though because Synthetix is still very much a work in progress.

It’s difficult for most people to understand (which limits the potential user base), the interface lacks professional trading tools, and it’s a pain to buy SNX, stake it and continually adjust the collateral level (currently 750%) to get rewards as SNX goes up and down.

Eight months after launching, they still haven’t worked out how to keep the supposed stablecoin SUSD actually pegged to the US dollar – it’s trading for 97 cents.

And it’s a pretty risky play: the exchange currently relies on centralised oracles (automated price feeds) which can go spectacularly wrong: such as in June this year when a front running bot exploited the oracle to net billions on paper.

Synthetix plans to move to Chainlink’s decentralised oracles in future.

The Synthetix Exchange’s own volume in the past 24 hours has been a bit over $800,000 – which would be a rounding error for BitMEX.

Founder Kain Warwick acknowledged this recently, tweeting: “We should be judging Synthetix on the organic exchange volume it generates and the demand for synthetic assets. At <$1m a day we still have a lot of work to do!”