As part of the Coronavirus Aid, Relief, and Economic Security (CARES) Act that was also used to provide stimulus checks to Americans, the U.S. government was able to allocate funds to help the U.S. Navy through the Aussie shipbuilding company, Austal.

The Department of Defense (DoD) has entered into the agreement with Austal USA as part of the national response to COVID-19 to maintain, protect, and expand critical domestic shipbuilding and maintenance capacity.

Austal to focus on steel shipbuilding capability for the U.S. Navy

As per The Syndey Morning Herald, the cash will be used to construct and equip build sheds at shipyards in Mobile, Alabama. Since steel is heavier than aluminum, expect ships to have a stronger build quality.

David Singleton told The Age and The Sydney Morning Herald about the “transformational” deal to include steel to its ship lineup as he added:

“We’ve spent 30 years fundamentally building aluminum ships. Our future both here in Australasia and in the United States will include steel ships. I’m sure of that and that opens up the market for a much broader set of programs than we currently have access to.”

This month, Austal released launch footage of its Queen Beetle passenger ship for Japan from its shipbuilding facility last April 2020.

As far as the Australian Stock Exchange is concerned, Austal was in a trading halt on June 19 due to a pending announcement regarding investments in its U.S. facilities.

Now, with this recent agreement in place, the trading halt was lifted and it seems that the news was already priced in. Investors were able to sell some of their shares and the stock price has been up almost 60% from its March low. 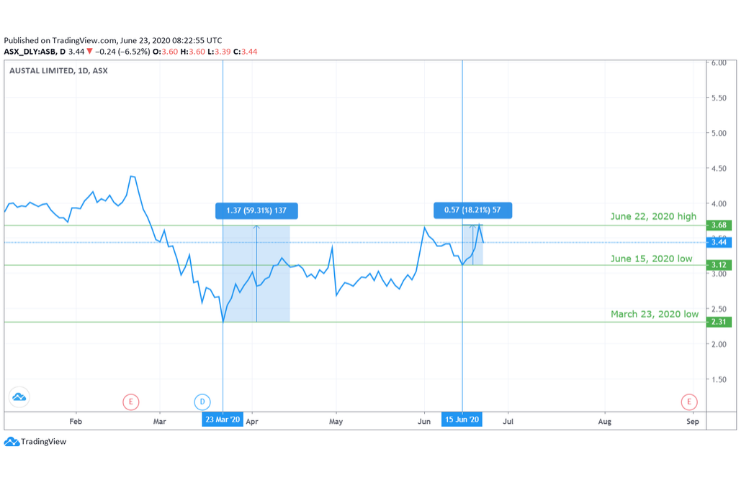 Those who traded the stock last week should’ve gained at least 10% to 20% depending on which price levels they entered. 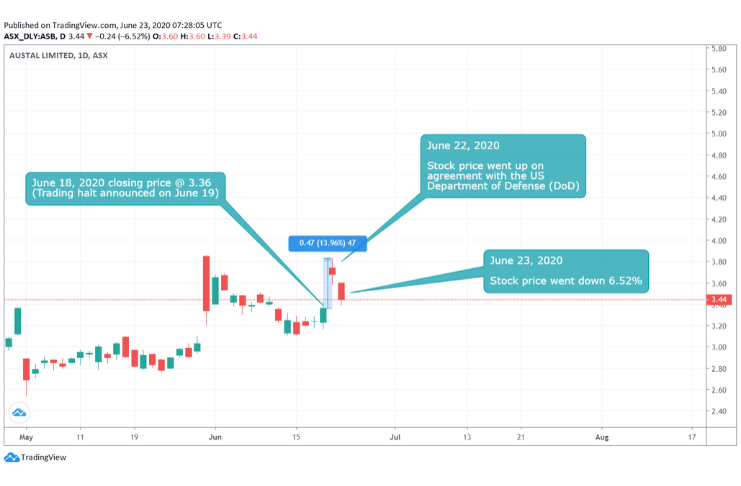 As of this writing, the Austal stock price has dipped to around 6.5% as investors shall observe if this shipbuilding company is worth holding in the long run.

On the other hand, traders in Wall Street are awaiting developments in the Dow Jones, and this U.S. government defense deal with Austal may trigger a positive sentiment in the markets.