The Witcher 3: Wild Hunt is still making waves five years after its release with the game recently hitting a new milestone.

For CD Projekt Red, The Witcher is the gift that keeps on giving. It’s been five years since the world has seen Geralt of Rivia in The Witcher 3: Wild Hunt, but recent reports reveal that the game’s success has stood the test of time with it selling 28.3 million units as of 2019.

When the game first arrived in 2015, the PS4 edition had sold the most copies taking 48% of the total sales. In 2019, however, it can be seen that the PC edition is the most popular, accounting for 53% of game sales for that year. 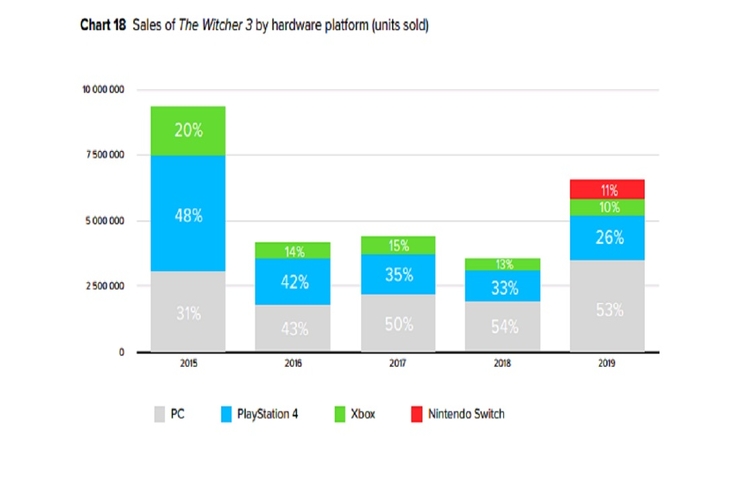 The Nintendo Switch edition had only been released last year, but it still managed to perform well, accounting for 11% of game sales and even above the Xbox edition.

Breaking down The Witcher 3: Wild Hunt game sales per platform, the PC edition would still reign at the top has sold roughly 12 million copies, followed by the PS4 and Xbox editions with 10.8 million and 4.3 million copies sold respectively. Though still new in the game, the Nintendo Switch edition has sold 700,000 copies worldwide.

The evolution of gamers’ purchasing habits can be seen with The Witcher 3: Wild Hunt sales. When the game was released, the physical sales accounted for 71% of game sales, with digital-only getting 29%. But as illustrated in the CD Projekt Red’s chart, digital sales continued to rise year by year, taking over physical sales in 2016 onwards and finally taking 82% in 2019. 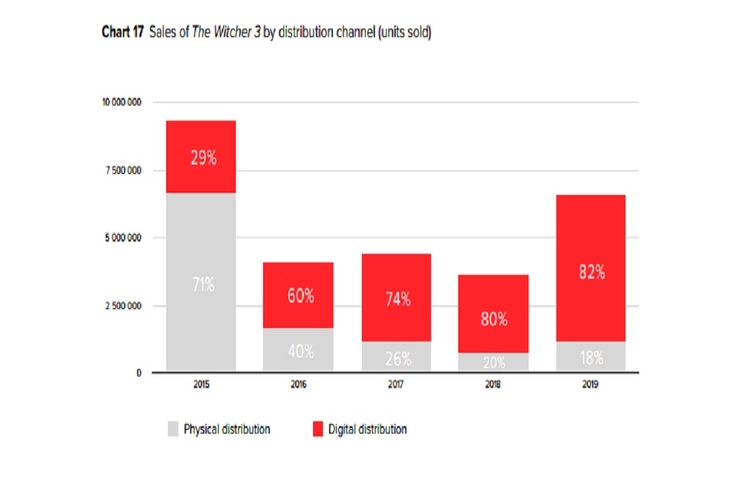 CD Projekt Red in their report also revealed where The Witcher 3: Wild Hunt is most popular. The game is shown to be most popular in Europe, with 37.2% of sales coming from that region. This may not be too surprising given that the entire Witcher franchise has European, specifically Polish, roots. CD Projekt Red is a Polish company and even the author of the original books, Andrej Sapkowski, hails from Poland. 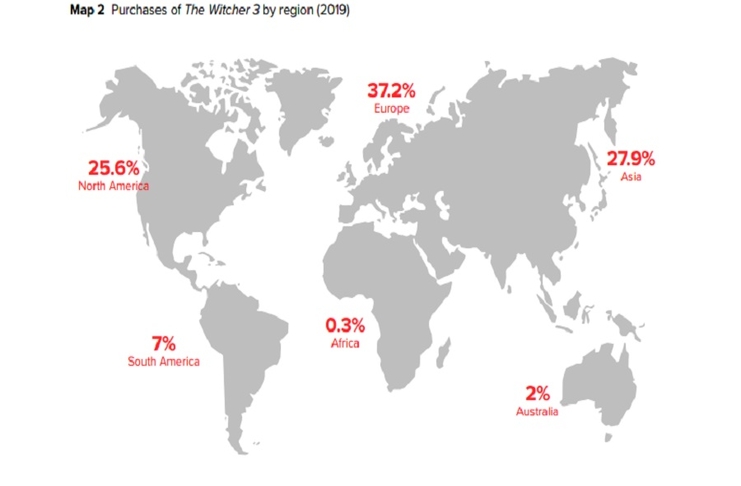 Netflix reported that during the first month of The Witcher’s release, around 76 million households had streamed at least two minutes of the show. With this being said, it can be assumed that people who had no idea of the game’s existence were quickly introduced upon watching the Netflix version.

It’s quite rare to see a game experience a resurgence (a big one at that) several years after its release. But it can also be said that the Netflix show’s success can also be attributed to the massive audience that the game and book series had amassed throughout the years.

CD Projekt Red’s next game, Cyberpunk 2077, is all set for a September release, but only time will tell if it would experience the level of success The Witcher game franchise did.