Home Opinion These dead and dying cryptocurrencies are still worth millions

Altcoins have had a pretty rough go of it this year, but some crypto projects have soldiered on regardless. Others meanwhile have become dead space with zero development yet they’re still listed on some major exchanges.

A number of new websites have emerged recently the rank cryptocurrencies not in terms of market cap but in developer activity.

This is measured by GitHub commit activity which reveals how active the developer community is for a particular project.

The analytics have shown some interesting though slightly concerning revelations.  Around 300 crypto tokens have some known market cap but lack any code development activity.

According to CoinCodeCap, more than 640 cryptocurrencies failed to publish any code in 2019. It added that the combined market cap of these ‘ghost coins’ is over $400 million.

“Other than these assets we also have a Scam coin list on our CoinCodeCap website. If we also consider them, then the overall valuation will cross $1 billion,” the report added.

Looking at Github activity again, the report noted that Proton Token, which has $80 million market cap, has not made any code changes since last year.

Another offender is BQTX, which CoinMarketCap lists as having $30 million market cap and $1.4 million in daily volume. This token has virtually no code on its Github according to the study.

When it comes to exchanges listing these inactive tokens, Yobit comes up top listing 62 of them. The report went on to elaborate;

“Normal investors get exposed to these assets on different Exchanges but these Exchanges prioritizing their own interest and are not performing due diligence.

“Most of these exchanges are not able to generate enough revenue from trading hence they charge a high fee for listing various coins. This behavior is toxic to the whole industry.”

The research serves as a stark warning that all is not what it appears in the crypto world and due diligence is needed, even for casual coin traders.

In terms of overall rank and developer activity, it is not surprising to see Ethereum at the top and Bitcoin at third.

Other high cap altcoins making the top ten in terms of developer activity include EOS, Cardano, and IOTA. 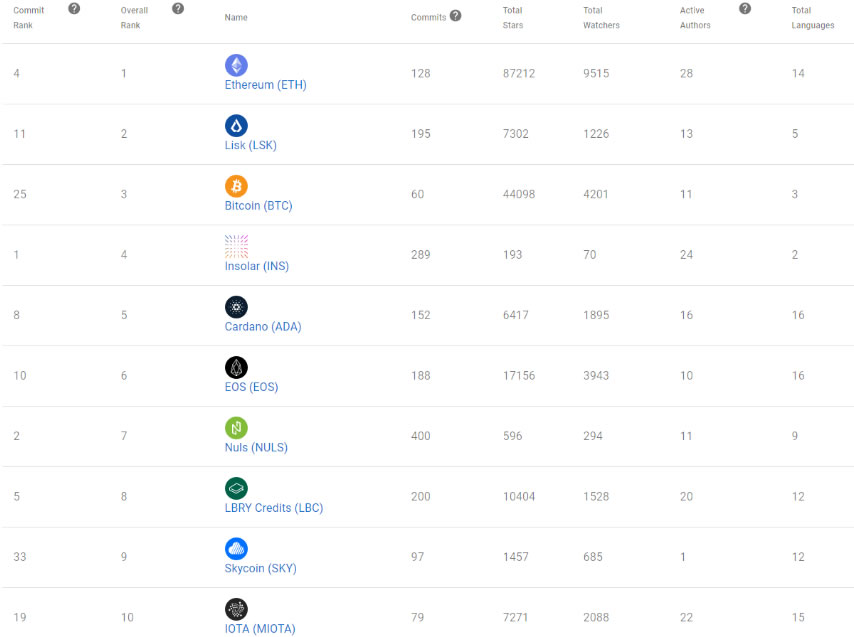 A few of the more obscure tokens are also on the list, their developer activity having been confirmed by Cryptomiso.com which also analyzes Github commits.

Insolar (INS) appears to be the most active token in terms of development at the moment.

The business blockchain platform is ranked way down at #400 in terms of market cap, which currently sits at $5.7 million.

INS token price has been a flat line since early 2018, so Github commits are not always a good sign of project health.

Other altcoins with strong development but weak market performance include Lisk, NULS, Aelf, Augur, and Golem.

Most altcoins are on the floor at the moment but the ones with strong development and continued upgrades are likely to recover quicker.

‘Rune Factory 4 Special’ free for a week for Nintendo online...

Meghan Markle urged to leave US by Trump supporters

Big Hit Entertainment: ‘No other group can become like BTS’