Social apps had experienced a massive surge during the coronavirus pandemic but none more so than TikTok.

TikTok has reached not just one but two milestones this year. The massively popular video-sharing app was an instant success ever since its release. Almost three years later, the app known for its peculiar 15-second videos is at an all-time high.

As countries implement lockdown protocols forcing people inside their homes with nothing much to do, it’s no wonder TikTok had become even more a sensation. Millions of TikTok users are now filling the platform with light-hearted and quirky videos.

Right now, TikTok is more than just a past time. The platform has become a way for people to get through the pandemic with a little dash of fun, providing a momentary respite to the fears brought by COVID-19.

Just recently, Sensor Tower, an app analytics firm, revealed that TikTok had been downloaded over two billion times on the Apple and Google app store. This milestone comes a year after the app had hit one billion downloads.

It should be noted that it took around a year and a half for TikTok to achieve one billion downloads. Now, in just a single year, it managed to achieve the same feat once again.

The popular app follows the likes of Facebook, What’s App, Messenger, and Instagram to achieve over two billion downloads. Google apps such as YouTube and Gmail had garnered over five billion downloads, but they can’t be considered since they come installed on mobile devices.

More than any other app

More than that, the video-sharing platform also had a huge 2020 start. Sense Tower also reports that TikTok has been downloaded 315 million times since January. These figures easily trump other apps in terms of downloads. In fact, that is the most downloads of any app ever seen in a single quarter. 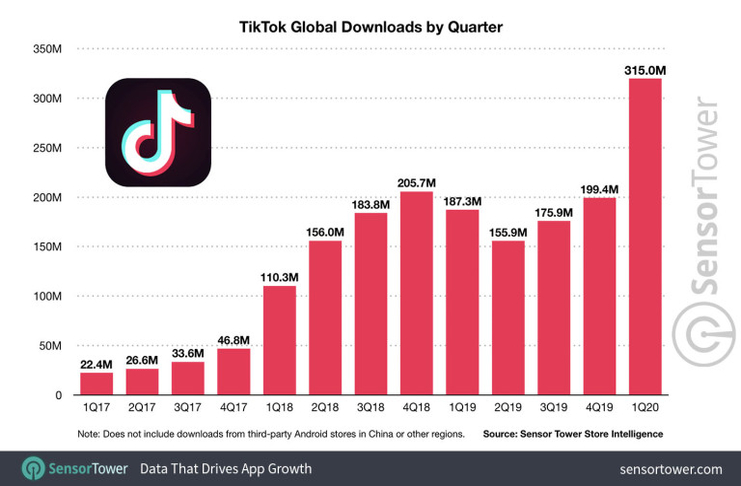 TikTok is already a popular app prior to the start of the year, but the pandemic pushed even more people to download it. It is important to note that these figures come from the Apple and Google app stores alone. It doesn’t take into account downloads from other third-party app stores that are popular in Asia.

TikTok and the Internet Culture

The platform is owned by Chinese firm ByteDance and one cannot deny the similarities it has with the now-defunct Vine app. Just like Vine, the app has become a gateway for the internet culture (memes, trends, and viral videos).

Launching in 2017, just a year after Vine’s shutdown, the short-form video-sharing platform quickly became a sensation. Many companies like Facebook had tried to replicate TikTok only to find lukewarm reception. The only other app that would’ve come close was Musical.ly. However, ByteDance acquired the rival app and had it absorbed into its platform.

So far, there is no telling just how long the pandemic would last or when life would go back to normal. But in the meantime, people can tune in to TikTok to find a momentary escape from the realities the world is currently facing.