According to an exclusive report by Deadline, the movie now has the distinction of being the biggest full-length feature film to premiere on Apple’s streaming service.

Furthermore, it appears that Apple TV+ is looking to make the streaming debut of Hanks’ film as widely accessible as possible.

The Deadline report also stated that Greyhound will be premiering on the service to over a hundred countries across the globe.

Produced by Sony Pictures, Greyhound was originally intended to be released in theaters everywhere next month, specifically on Father’s Day weekend.

But like plenty other major film releases this year, the WWII movie has since seen its release date get postponed due to the ongoing coronavirus pandemic.

Of course, Greyhound is far from being the only Sony Pictures production forced to deal with delays because of COVID-19.

Ghostbusters: Afterlife’s release date has now been moved from July 10, 2020 to March of next year. Another high-profile project, Morbius, which stars Oscar-winner Jared Leto, has been pushed to March 2021 from its original release schedule of July 31 this year.

Tom Hanks’ own brush with the virus

The 63-year-old Hollywood icon famously had his own nasty encounter with the coronavirus more than a couple of months ago.

While shooting Baz Luhrmann’s Elvis in Australia in March earlier this year, the multiple Academy Award winner, along with his actress wife Rita Wilson, had contracted the virus.

The actor and his wife were the first major celebrities to get sick with COVID-19, with other stars Idris Elba and pop singer Pink soon to follow.

Hanks and Wilson have since recovered from COVID-19, having returned to Los Angeles after spending weeks quarantined at the Gold Coast University Hospital in Queensland. 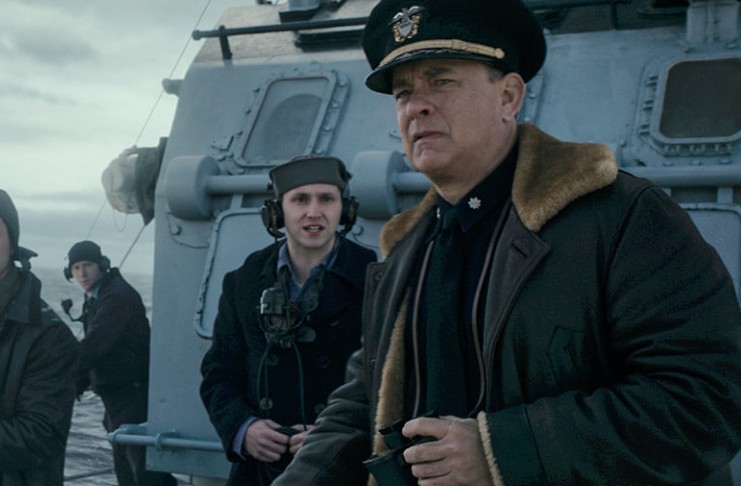 The upcoming WWII naval film should grant Hanks an opportunity to bounce back from the coronavirus and do what he does best—bring his everyman charm to epic movies about people caught in interesting, or even impossible circumstances.

In Greyhound, he is doing double duty as the star of the film and its scriptwriter. He plays George Krause, a naval officer who captains the titular Navy destroyer ship Greyhound during the Battle of the Atlantic, which happened from 1939 to 1945.

This naval battle is considered by many historians as the biggest and most protracted in recorded history.

Hanks is no stranger to WWII epics, especially after having starred in Steven Spielberg’s now-classic D-Day film Saving Private Ryan.

And in terms of portraying boat captains in mortal peril, the actor also has some experience with that through 2013’s Captain Phillips, which saw the star deal with Somali pirates off the coast of Africa.