Home Technology Top 5 reasons why the DJI Mavic Air 2 is the best...

The DJI Mavic Air 2 was just launched recently. It has not reached the hands of users yet, but it is already considered as the best drone available today.

DJI Mavic Air 2 has been on the hands of tech reviewers and the first impressions were excellent. The improvements in the flight time are fantastic plus it handles windy conditions better.

It is without a doubt packed with great features. But, are those features enough to call it the best drone DJI has released so far? Here are the reasons why.

The Mavic 2 Pro and the Mavic 2 Zoom are the pricier drone options from DJI. Both of these models can shoot 4k. So what’s the advantage of the cheaper Mavic Air 2?

The Mavic Air 2 can shoot 4k at 60fps. Both the Mavic 2 Pro and the Mavic 2 Zoom can only shoot 4k at 30fps. The double amount of fps is great for shooting slow-motion videos. For regular usage, the 60fps of Mavic Air 2 will also provide smoother footage.

There are new footage options for the Mavic Air 2 such as Hyperlapse and 1080p ultra slow-mo video at 240fps. The QuickShot and Asteroid mode are still included.

DJI Mavic Air 2 is larger than the previous model. Looking at it resembles a shrunk Mavic 2 drone. Despite the larger size, it only weighs 570g.

The larger size of the Mavic Air 2 makes it more stable in the air compared to the smaller Mavic Mini. Stabilizing the drone is also easier. During windy conditions, this gives the user the peace of mind that it will still shoot clean footage. 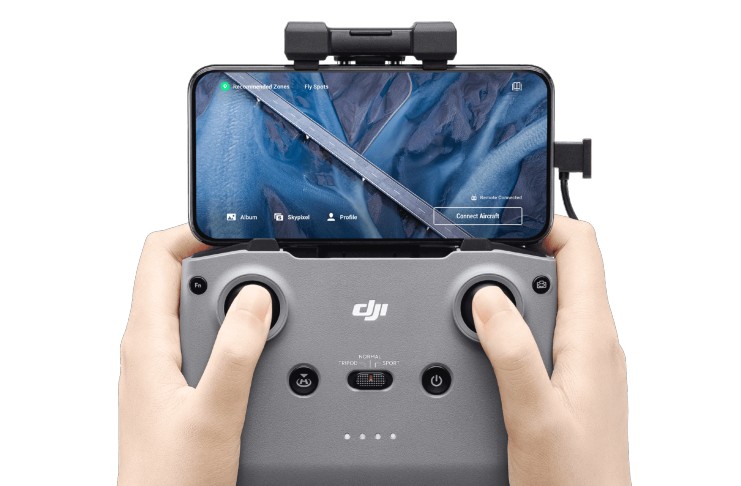 The ease of usage is one aspect that DJI focused on when creating the Mavic Air 2. The developing team’s hard work paid off as this drone’s controller is very much similar to the DJI Smart controller sans the screen.

In terms of design and comfortability. DJI nailed it this time. Holding the controller is very comfortable and ergonomic plus it is only 393 grams. Some controllers take a toll on the arms when using for long. It is never an issue with the Mavic Air 2.

The improved controller also allows a quicker connection to the drone. It also supports Ocusync 2.0

DJI continues to impress with the Mavic Air 2. The company managed to increase the flying distance by more than double compared to its predecessor. The new Mavic Air 2 is rated to fly for up to 10kms, while the Mavic Air only flies for 4km.

Thanks to Ocusync, the Mavic Air 2 switches from 2.4GHz to 5.8GHz frequencies depending on the situation. This allows the user to get the best signal available and avoid sudden interruptions.

Mavic Air 2 has new safety features included. One of which is the “AirSense”. This new feature allows the drone to receive aircraft signals and determine their whereabouts. This is the first time that DJI has included this feature on its consumer lineup. Latter models will most likely include this as well.

For new drone pilots, navigating around obstacles is quite hard. DJI included the Advance Pilot Assistance System (APAS) 3.0 to make it easier for the pilot to get around obstacles. Of course, nobody wants to hit a huge tree with a $799 drone.

What is the catch?

The DJI Mavic Air 2 has its own share of shortcomings as well. Its camera feed stutters which make it difficult to check the framing of shots. While the 4k resolution and higher frame rate are praised, the smaller sensor is still not enough for commercial quality low-light shots. Noises are still apparent at higher ISOs.

No drone is perfect yet, but it checks all the major points for drone pilots at $799. These new features benefit the pilot through better controls. It also gives better footage for commercial use.

The higher framerate plus the better controls give the pilot a higher chance of nailing the best drone shots.

The novel coronavirus pandemic is still affecting industries globally. But once the lockdown is lifted, it is would be nice to see the footage that will be shot with the DJI Mavic Air 2 soon. Ultra slow-mo while up in the air? Now that is exciting.