Twitch has announced that it is not only opening the beta version of Watch Parties to all its partners, but to all streamers in the United States.

With this announcement, every streamer in America on Twitch can now watch what’s on Prime Video with their viewers, even those who are not official partners of Twitch.

On top of that, the company is also planning to roll out Watch Parties in international markets in the coming months.

“During this time of uncertainty, we know how valuable shared experiences like Watch Parties are to our community,” Twitch stated in the blog post.

For those not familiar with Watch Parties, it is a feature that allows creators and their followers to watch together some selected movie titles and TV programs from Amazon’s Prime Video service (including Amazon Originals content).

It was back in October of last year when the company decided to allow a number of creators to try out an earlier version of Watch Parties on Twitch.

Six months later, Twitch was able to collate feedback from the testers in order to further fine tune Watch Parties, particularly with features like Picture-by-Picture format, which lets audiences view and even listen to reactions from creators in real time.

Right now, the beta version of Watch Parties is now accessible by all Twitch Partners in America, as long as they have an active Amazon Prime account.

In the next few weeks, Twitch will be working to expand access to all creators in the US who currently have Prime memberships.

As for new US creators and those based in other countries, the company says that they will be getting a notification via email as soon as the Watch Parties feature has gone live in their Creator Dashboard. 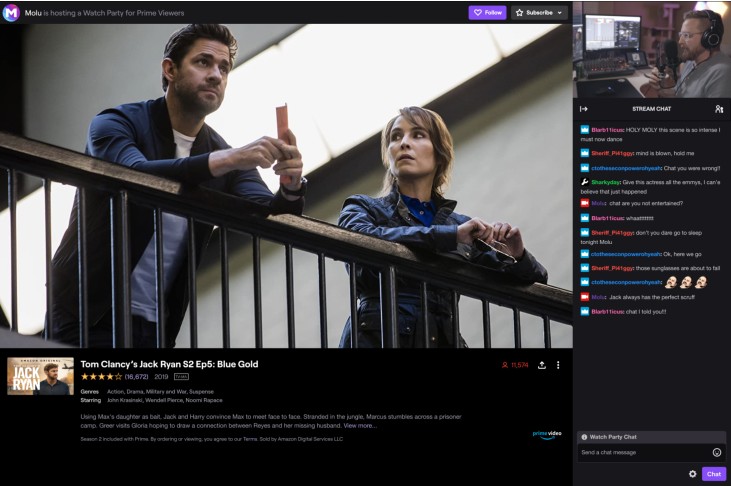 Of course, also included are popular shows such as Survivor and Star Trek. Here’s the full list.

As more and more people stay at home in an effort to help flatten the curve, live streaming services like those offered by Twitch often provide a means for folks to entertain themselves, or even entertain others, as creators have.

Even among gamers, the platform has proven to be a popular choice, as evidenced by the nearly-one-million-strong viewers who converged on Twitch last Friday to tune in to Valorant streams.