The Cobinhood cryptocurrency exchange has filed a police report against its own CEO, Tai-yuan Chen, due to personal and investor disputes.

Users of the Cobinhood cryptocurrency exchange came in for a bit of a shock today due to an unexpected announcement.

The exchange, based in Taiwan, announced that it had filed a police report against its own co-founder and CEO, Tai-yuan Chen.

The announcement by Cobinhood reads, “Due to personal and investor disputes, Mr. Tai-yuan (Popo) Chen, co-founder of COBINHOOD, has ceased to participate in corporate affairs since late April 2019. In addition, his emotional instability and personal behaviors have caused safety concerns of all employees. As a result, the company has filed a police report. In order to protect the safety and rights of all employees of the company, all employees will work from home until personal safety can be ensured. All business, technology and product services of the company will proceed as usual.” 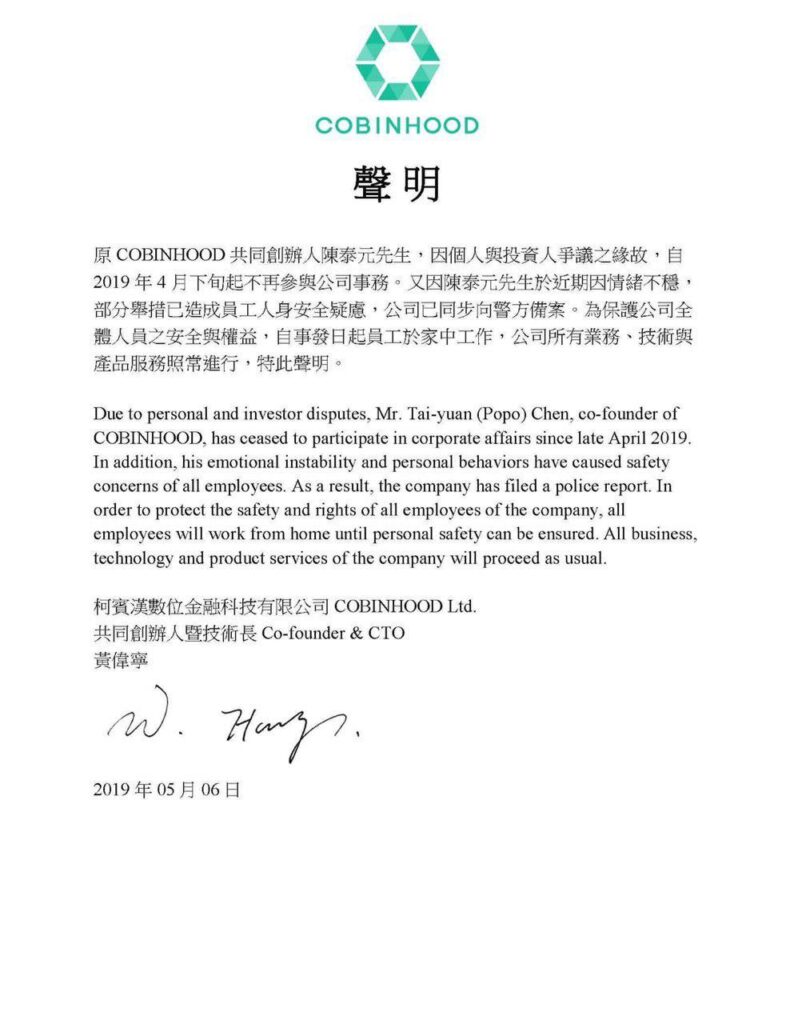 No other details have been released and it is as yet unknown what specific actions Tai-yuan Chen (also known as Popo Chen) committed to warrant such an act by the company he co-founded.

Who is Popo Chen?

Tai-yuan (Popo) Chen is described as a 27-year-old serial entrepreneur on his LinkedIn profile.

He entered National Taiwan University after skipping a year of senior high school and graduated at the age of 22 with a master’s degree in electrical engineering.

After graduation, he founded a livestreaming platform called 17 Media that saw more than 5 million daily users across Asia as well as having angel investors realize a 20x return on their investment.

He then went on to co-found Cobinhood in 2017. The exchange boasted that it was the first high-frequency, zero-trading fee cryptocurrency exchange. It raised US$10 million during its ICO in October 2017.

Cobinhood was eventually served with a cease-and-desist letter from Robinhood, a commission-free platform for investing in exchange-traded funds and public companies.

Robinhood claimed that the name and branding by Cobinhood were “confusingly similar” to its own.

More information about this development will be revealed during Cobinhood’s video Q&A session, which is scheduled for Wednesday, May 8th at 8 pm Taiwan time.

People can submit their questions to the Cobinhood team here, and the company will give as much information as they are “legally be allowed to provide” at that time.