A month after it hit rock bottom, personal consumption in the United States did its sharpest climb in May while incomes slightly dropped ahead of the end of unemployment benefits.

Despite the bleak financial picture prompted by the coronavirus pandemic, U.S. consumer spending has seen an upward trend, thanks to the government’s stimulus checks and unemployment benefits.

The jump, however, is still below pre-pandemic levels. Yet, given the sudden surge, economists noted that the rising trend is a positive sign for the country’s economic recovery.

U.S. consumer spending climb in May

In a new report posted by the Commerce Department on Friday, June 26, consumer spending in the United States climbed as much as 8.2%, coming from its lowest drop of 12.6% in April. The increase, according to the agency, is the sharpest boost in over six decades worth of data.

On the one hand, the median estimate based on a survey conducted by Bloomberg was 9.3%.

For Ian Shepherdson, the Chief Economist at Pantheon Macroeconomics, the spike in U.S. consumer spending appears to be a positive sign for the country’s economic recovery. According to Shepherdson, personal consumption accounts for 70% of the country’s gross domestic product. 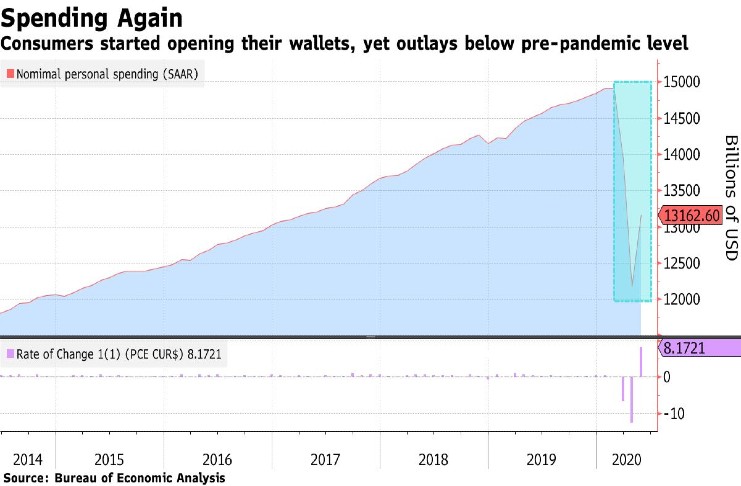 The economist also mentioned that “recovery is underway” given what the data shows, yet he warned that the path appears to be “long and uncertain.” As per the economist, he explained that the rise of coronavirus cases in the West and South parts of the U.S. could threaten the country’s consumer spending recovery, which could eventually lead to a relapse.

A relapse in personal consumption could be true or not. But, given that the government’s financial support and unemployment benefits will soon expire, the likelihood of relapse seems possible.

As per the report, businesses such as recreational goods, motor vehicles and parts, and healthcare services have massively contributed to an $892.6 billion surge in May consumer spending.

In a survey conducted by the Census Bureau, the majority of adults used or plan to spend their stimulus checks mostly on household expenses like housing, food, as well as utilities. On the other hand, 14% of the participants said they kept the funds and allotted it to their savings.

Contrary to consumer spending’s upward trend, incomes in the month of May plummeted by 4.2%. The trend slightly fell from April’s all-time high record for personal profit and higher than the six percent slump economists predicted last month.

“[The decline] primarily reflected a decrease in government social benefits to persons as payments made to individuals from federal economic recovery programs in response to the COVID-19 pandemic continued, but at a lower level than in April,” the report noted.

Salary in May increased by 2.7%, the highest jump in more than two decades coming from a record slump in April. Personal savings in the same period, however, plummeted from April’s surge of 32.2% to 23.2%.

But according to the agency, the numbers are still high and nearly a triple compared to February’s 8.4%.