People in Wall Street had a positive rally party yesterday. The Dow Jones had a stellar performance closing over 500 points while the S&P 500 revisited its key levels for the first time since March.

Dow Futures rise over 200 points in hopes of resuming this week’s rally. With the recent news about Novavax starting its first human study for its coronavirus vaccine, it seems that Wall Street is showing signs of hope. The Dow Jones also broke above 25,000 level for the first time since early March.

“For the first time in this crisis, we are being bombarded by good news […] The S&P 500 finally breaks above its 200-day moving average (3000) and more new vaccine drugs look promising.”

In addition, MKM Partners chief market strategist Michael Darda told CNBC that despite the market has been making a V-pattern upward recovery, people are still skeptical to continue their confidence in trusting Wall Street. 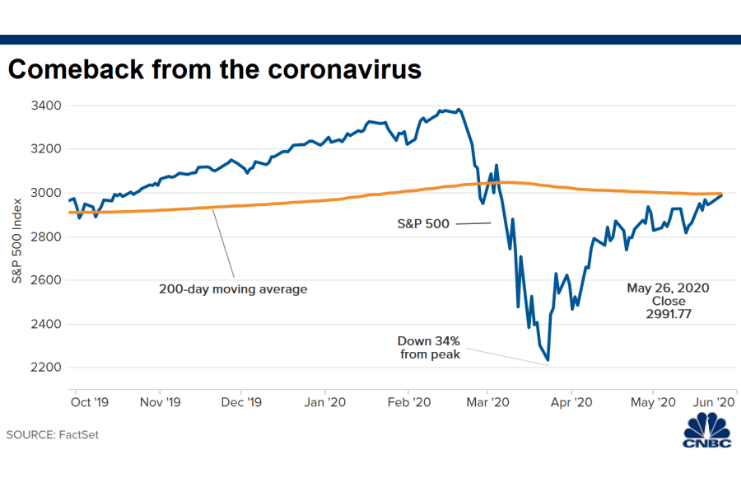 For the first time since March 5 in Wall Street, the S&P 500 was able to breach the 3,000 level briefly as many analysts believe that breaking above this level would trigger a long-term bullish course.

Yesterday, aside from the early news from Novavax announcing their vaccine trials, the S&P 500 was carried by the banking sector being boosted by the economy reopening.

Citigroup grew more than nine percent while JPMorgan gained 7.9% after CEO Jamie Dimon commented that the bank is now “very valuable” at current prices. The JPMorgan CEO added that he is not trying to predict the bottom since its earnings would take a hit in 2020 as loan losses increased amid the COVID-19 pandemic.

With the ups and downs of the relationship between the U.S. and China, instead of scaring Wall Street, the futures signaled investors to bet on the economy’s reopening.

Lynn Franco, senior director of economic indicators at The Conference Board, said in a statement that short-term expectations moderately increased as the gradual re-opening of the economy lifted consumers’ spirits.

As of May 26, all U.S. states had reopened their economies. Wall Street may be set to soar to new highs if the good news of the week outweighs the chaos that is happening in Hong Kong as well as the ongoing U.S. tensions with China.

Other blockchain games are stealing the show from Axie Infinity, DappRadar...

Steam removes NFTs and crypto-related products from its platform