Warner Music Group Inc. has delayed the pricing of its initial public offering (IPO) this week to avoid a massive sell down on its trading day.

Artists called for online musical performances and other related events to be postponed on “Blackout Tuesday” in support of the George Floyd protests.

With Spotify recently taking the reigns in the streaming industry landing Joe Rogan, it looks like Warner Music is about to enter the arena in a battle for streaming supremacy.

They also filed for IPO since February, according to a tweet from the Los Angeles Times.

A report compiled from Bloomberg suggests that initial public offerings are back in full swing. Fundraising volume globally is expected to bounce back to pre-pandemic levels this week with Warner Music Group Corp. and NetEase Inc. leading the pack.

Warner Music’s IPO is set to as much as US$1.8 billion, while the Chinese internet giant NetEase plans to price its IPO at $2.8 billion in Hong Kong’s stock exchange since the U.S. banned most of the Chinese firms due to the trade war.

These two leading companies, along with others, are set to raise a total of more than US$6.4 billion [AU$ 9.2 billion], according to the report. 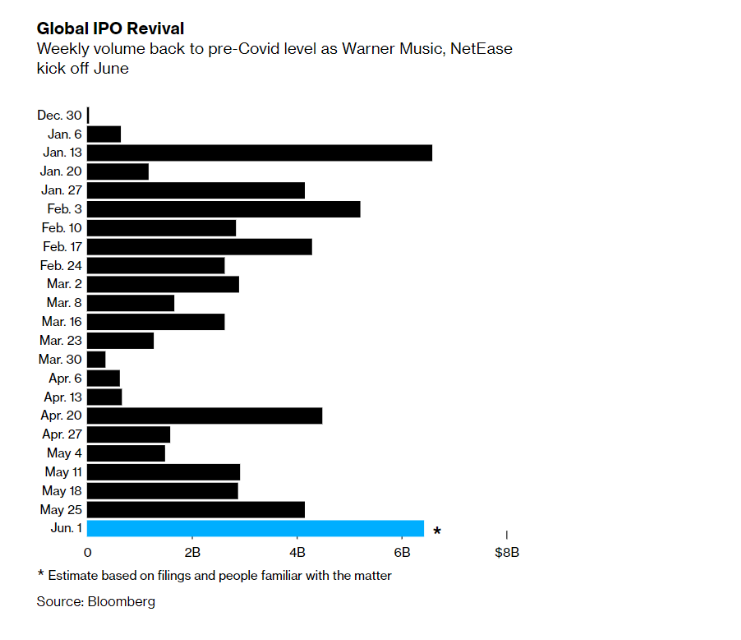 While Warner isn’t planning to issue new shares in the IPO, two entities by billionaire Len Blavatnik are selling most of the 70 million shares estimated at around $23 to $26 per share.

Aside from Warner Music and NetEase, other IPOs are also emerging, such as ZoomInfo Technologies Inc., with its $890 million IPO listing, as well as Chinese e-commerce firm Dada Nexus Ltd., Shift4 Payments Inc., and cancer treatment developer Legend Biotech Corp.

It was observed that the majority of investors were focused on entertainment companies, especially with streaming, which was used by consumers during the coronavirus lockdowns.

As listeners that were stuck at home entertaining themselves while on lockdown, with apps like TikTok and Instagram, further evidence supports that live home concerts being streamed by these music artists are piquing investors’ interests.

In addition, Music streaming platforms have shown growth in Warner’s sales with Spotify and Apple taking up 27% of its $4.5 billion in revenue for the fiscal year, filings show.

With Warner Music, along with the entertainment industry finding other mediums to generate revenue to adapt to the “new normal,”  it is imperative that other media and tech firms would follow suit.