Weaving Tides comes from indie dev Follow the Feathers. They are asking for funding through a Kickstarter at the moment, using a quick demo for their campaign.

The demo itself looks a beautiful indie style reminiscent of The Legend of Zelda: The Wind Waker. The fantastical world is worth the backing within many games available this May.

Tides lets players weave a landscape back together

Tides has a straightforward concept so far. The world is a fluffy world that looks like it comprises of fabric and textiles. Almost every terrain has weaving interspersed in its gameplay.

Riding atop a bluish dragon, the goal is to explore the magically weaved landscape. The player needs to fly around and solve puzzles, mostly with different stitch types. The player acts as a needle, pulling around something that looks like fabric as the thread.

The entire process seems to look like the player is weaving the world back into shape. The player can tie down monsters, connect areas, and recreate the landscape.

As players control the dragon, the player can press the spacebar to go above and below the weave. The dragon’s tail acts as a thread most of the time, letting the player put everything together.

The movement is natural, and going up and down layers is easy and fun. The controls are smooth and have no feeling of clunkiness. The demo itself is super short, but it’s worth the try for everyone.

During conversations in Weaving Tides, every character has high-detail portraits. The entire story feels experimental, with a sort of Zelda and Pikmin-like charm to it. The art feels like a more colorful version of Supergiant Games’ Pyre.

Follow the Feathers is looking for funding in Kickstarter, with a $19,441 goal by May 31st. Digital versions of the game start at $18 and backers can add more if they want more. As of this writing, the game has 340 backers and almost $13,200 in pledges. 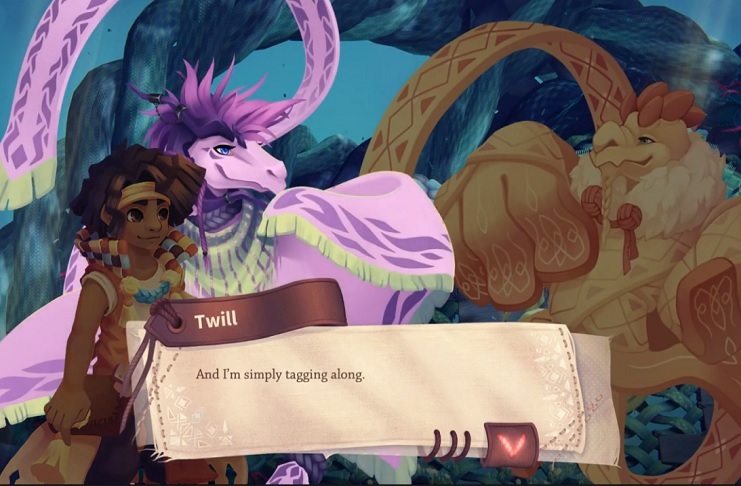 Pledges for the game go from as low as $6 for people who want to support. The highest tier pledge goes upwards of $3500 for a bevy of different collector’s item rewards. The highest tier includes goodies like a Kilim scarf, art book, OST, and in-game credits.

Weaving Tides is among the many games putting out a demo this week. Other notable game demos include Ghostrunner, a 3D freerunner FPS game.

Weaving Tides is an artsy game that is worth the support that it can get from backers. Give the game’s Kickstarter a quick look for more updates soon.