Home Gaming ‘What The Golf?’ coming to Nintendo Switch on May 21

What The Golf?, the epically silly golf game from Triband, will be making its debut on the Nintendo Switch platform this coming May 21.

Triband formally made the announcement through its official Twitter page, while Nintendo also confirmed the release date on its website.

YES! Your eyes are fully functional. WHAT THE GOLF? is swinging itself directly onto your Nintendo Switch on May 21st!

And it will feature a brand new 2-player couch party mode!

Originally exclusively accessible via a subscription on Apple Arcade, What The Golf? now expands to Nintendo Switch at just under twenty bucks.

For those who want to pre-order now, they might be delighted to know that they can enjoy a 25% discount if they pre-order from Nintendo’s website.

The golf game for those who hate golf

It’s possible that those who are not familiar with What The Golf? will dismiss the game as just like any other golf parody game out there.

But for those who want to give the game a try anyway, they just might be in for a surprise.

As far as basics are concerned, What The Golf? is a physics-based golf parody game wherein players shoot for the hole and go through several levels.

What’s not encapsulated in that previous statement, however, is the fact that—let’s just say—the rules are kinda flexible.

For instance, not only can players tee a golf ball, but they can also do the same with a car, a horse, or even a whole house—Animal Crossing this ain’t.

The new release should bring in more absurdity to a game that already plays loosely with the laws of physics.

Players can soon participate in spectacular golf boss fights (because why not) and discover new ways in which conventional golf rules can be applied.

At the same time, because What The Golf? is, at its core, a parody game, it will also make hilarious references to other more popular or successful games like Portal or Super Mario Bros. 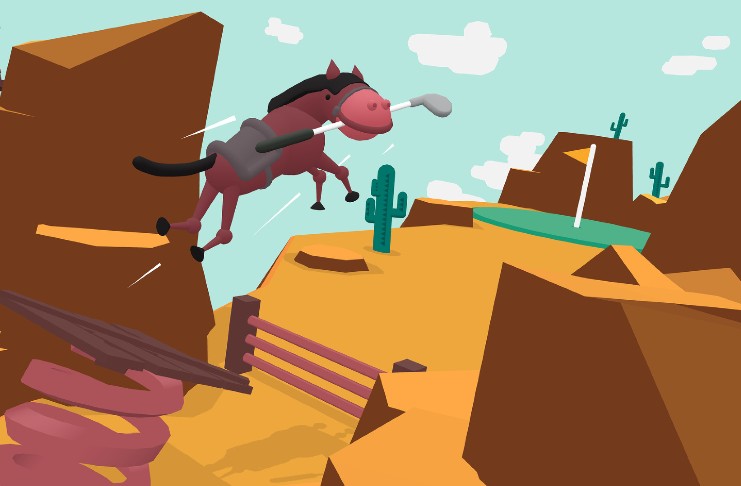 According to Triband, the version of What The Golf? that will be rolling out to Nintendo Switch will come with a local multiplayer Party mode.

This mode will basically let two players compete with each other through various golf courses at the same time, so one can just imagine the mayhem.

On top of that, the upcoming release of What The Golf? On Nintendo Switch will also mark the debut of some new features, including the touch screen and the gyro for a certain number of levels.

Without spoiling anything, the folks at Triband are promising that come May 21, there will be a number of surprises for players. And again, the developers are reminding everybody that playing What The Golf? will NOT make them a better golf player.

Image 1 and Image 2 courtesy of Triband