Home Contributed ‘White male’ controversy: Should Bitcoin have a gender?

Recently, Andreas Antonopoulos, the famous bitcoin podcaster, speaker and writer, our “godfather of Bitcoin,” tweeted that he would like to be interviewed on podcasts other than the “white, male, finance-focused” podcasts that he is usually interviewed on.

Fantastic recommendations for podcasts. I think we've covered almost ALL the white male podcasters I should visit.

How about some other shows?

Not American, not investment/finance, not men, not white. I can't change me (I'm many of the above) but we can change the other side!

What followed was a Twitter shitstorm in which the very crypto bros that generally follow him had their noses put out of joint. They complained, they trolled, they lamented, they bullied and some of them even stopped buying his subscription.

“I explicitly asked for people to propose podcasts that are NOT from the usual demographic. I can’t reach a more diverse audience if I’m only talking to the same podcasters with the same demographics.“ Antonopoulos wrote on his website.

Why should gender matter when it comes to bitcoin? Isn’t bitcoin for everyone? 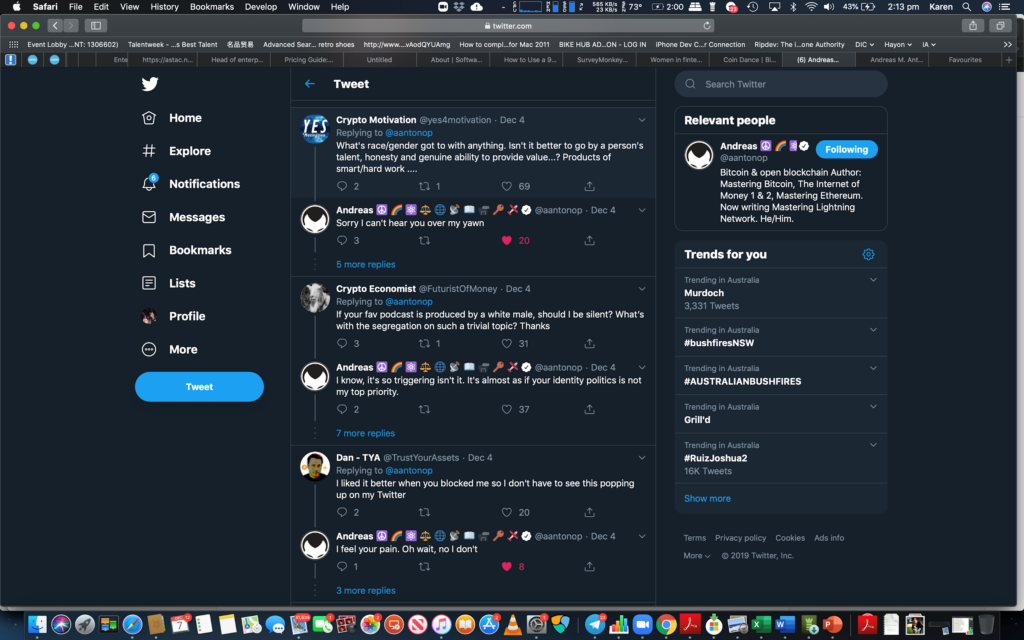 A quick search on the demographics of Bitcoin buyers reveals that in 2019 nearly 10 percent of buyers identify as women. Which is up from 5% in 2017, which is an encouraging trend.

The question is why are there fewer women in the crypto space? Why does it not feel like crypto is for everyone and why do leaders like Andreas have to keep reminding us to be inclusive?

I discovered the Bitcoin and Blockchain world in October 2017 when I was running one of the biggest meetups in Melbourne – Australia, Weekly Talk and Trade at the Blockchain Centre.

A quick look around the pizza, beer, and crypto audience definitely reinforced the male majority stereotype but I never felt left out or marginalized.

Many of the young traders mentored me to help me buy wallets, sign on to exchanges and to learn how to buy crypto.

But like anything new, it’s a whole new language and it is still highly technical and highly volatile and those things alone make it unattractive to women.

The answer, of course, is education and to Antonopoulos’ point, opening up the circle past the usual suspects.

We cannot get mainstream adoption if we don’t appeal to different audiences and make the language simple to understand for new players.

Many found Antonopoulos’ comments racist and sexist and said he could have achieved his diversity goals in a more tactful way, in which he didn’t have to offend 90 percent of the Bitcoin population.

The question is, do you have to be provocative to be a trailblazer? Perhaps he felt the call out would wake up the community and his comments definitely brought attention to the issues surrounding the Bitcoin population.

“I will not apologize for being an ‘SJW,’ a social-justice warrior. I dislike the word ‘warrior,’ because I am a pacifist and abhor violence,” Antonopoulos wrote on his website.

“But I believe in social justice. Not imposed from above, but as a personal choice and commitment to a fairer and more just society through our own choices and actions.“

The cost of speaking up and asking for people outside of his current audience could be seen as insulting to the very people who helped build his following but Antonopoulos continued to stand firm about his statement.

“I achieved my goal: I have more than 30 invitations to some great podcasts. Still many many white finance dudes, which I will be happy to go talk to again. No one was excluded or shunned.

“But I also got more than a dozen podcasts from a variety of people outside my “usual” audience. From different parts of the world, from different cultures and also lots of people of color.

“I’m excited to expand my audience. I’m delighted to have the opportunity to bring EVERYONE into crypto. Even the people who don’t feel like they fit, who didn’t think my invitation was for them, who didn’t speak up.

“I lost a few Patrons today because they were unhappy that their contribution didn’t buy my speech, didn’t influence my opinion and didn’t change my mission.”

Meanwhile in Australia and globally, in an effort to improve the gender equation, we run Women in Blockchain events to educate more women about the blockchain space.

We don’t want to offend anyone and men are always welcome at our events. Join us here:

During the ICO era, the highest role of women on blockchain projects tended to be marketing or community manager, there were very few women on the advisory boards.

To this day, I continue to see investor decks where you can scroll to page 3 before seeing one woman!

I hope to see more women involved in blockchain projects at EVERY level and have taken a personal vow to end all-male panels (‘manels’). We need to continue to make an effort to be inclusive even if it is a less obvious choice.

It takes much more effort for women to overcome imposter syndrome and put their hand up to speak and we are often flattered to be asked. We may be nervous the first time but we can only build up our confidence by getting up there and giving it a go.

I urge our male colleagues to make an effort to ask us and to continue to invite us to speak on panels.

We hope that in the future, crypto and blockchain technology will be adopted evenly by everyone and we will no longer have to be warriors of change. Until then I want to thank Antonopoulos for speaking up on behalf of the minority. 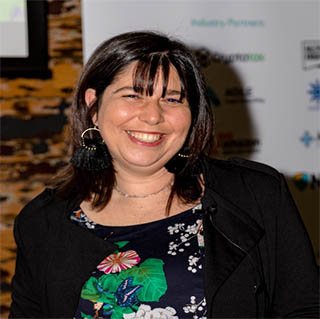 Karen Cohen, “Blockmum” joined the Blockchain Industry in 2017 as the General Manager of the Blockchain Centre Melbourne. Since then she has gone on to become a founder of her very own HR Consultancy in the Blockchain Space, “Blockconsulting Group”. Karen is on the Board of Blockchain Australia, co-runs Women in Blockchain in Melbourne and is the Global Head of HR for NEM.io Foundation.