Home Blockchain Cryptocurrency Why has Tezos trounced the competition in 2019 with 250% surge?

Tezos is one of this year’s top-performing crypto assets but what has driven its epic 250% surge in 2019?

There have been a number of fundamental factors that have favoured this altcoin in 2019. This month alone Tezos has revisited its 2019 high as a late surge pushes XTZ into the crypto top ten.

The move may have been driven by wider earning opportunities.

Staking a future on Tezos

Tezos is a proof of stake smart contract platform which allows holders to earn rewards by staking (or ‘baking’ in their terms) tokens.

This has the dual effect of strengthening the network and encouraging investors to hold on to them.

Delegated staking allows holders of fewer tokens to participate so the initiative is not just for whales as other proof of stake tokens appear to be.

Over the last month or so a number of exchanges have launched custodial staking incentives for XTZ.

Two weeks ago Binance announced that it would support zero-fee Tezos staking along with an airdrop which was bullish for price.

Coinbase also provides staking services and the opportunity to earn a few tokens through its Earn program.

Kraken joined the club last week when it announced a 6% earning incentive for staking Tezos on the exchange.

Digital asset funds such as the Bitwise10 large cap crypto index fund have been dropping other assets such as Stellar and Dash in favour of Tezos.

Also on the fundamental side is the Foundation hitting its target of over 1,000 developers trained this year as the ecosystem continues to show solid growth.

It is no wonder then that Tezos has had a bumper year while the rest of the crypto assets have been crumbling. 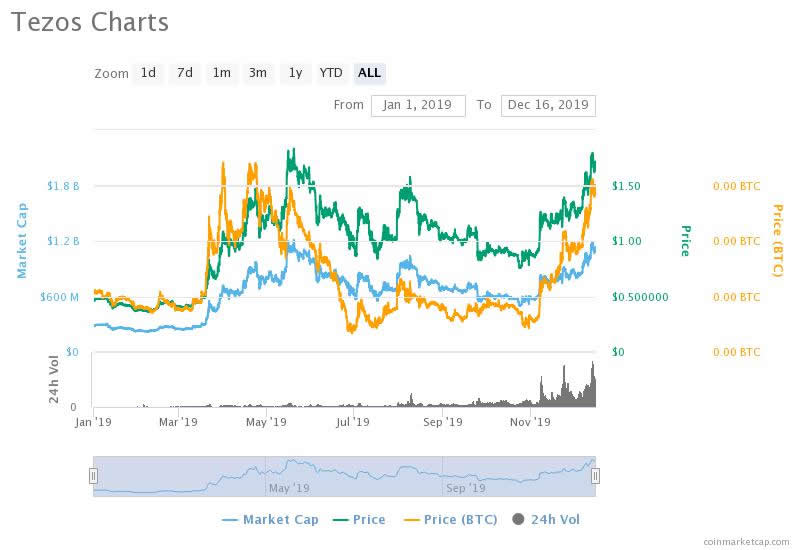 The token re-tapped its 2019 high of $1.80 over the weekend which caused it to enter the top ten in terms of market capitalization.

The move enabled XTZ to flip XLM for the coveted tenth spot as its market cap surpassed a billion dollars.

At the time of writing, Tezos had corrected a little to $1.65 which is still a gain of 25% this month so far.

There may be a further pullback after such an epic run but 2020 could see further gains for Tezos as staking tokens becomes a more attractive investment model.

Ethereum may also start to pick up again when it follows suit with the long-awaited consensus upgrade to proof of stake.