One year on and the Lightning Torch is back. But is it too early for a rerun that could highlight the issues currently plaguing the network?

It’s the one year anniversary of the first Lightning Torch, which kicked off on January 18 when Hodlonaut sent 100,000 Satoshis (worth 34 cents at the time) on its way, with relay participants adding another 10,000 satoshis each time they passed the torch on.

As a promotional stunt, it was a huge success, with big names like Twitter CEO Jack Dorsey and Binance’s CZ participating, before the relay ended on April 13, with a grand total of $217.78 worth of Bitcoin.

But it may be a little too early to restart #LNTrustChain2, as it may simply highlight some issues that are yet to be fixed.

How many sats before it breaks?#LNTrustChain2

Hodlonaut’s line “how many sats before it breaks’ is presumably about the intention of users to pass it on – but it might as well refer to the network’s current difficulties with transactions of larger (but still small) amounts of Bitcoin.

By March 2019, with the ‘torch’ holding around $150 worth of Bitcoin, users were already finding it more and more difficult to pass on the baton.

That’s because each node the $150 transaction is routed through basically needs to have $150 available to be able to pass it on.

#LNTrustChain was designed as a social experiment – but due to overwhelming success it turned into a stress test of channel liquidity #LightningNetwork pic.twitter.com/mVN4fA2NsV

One third of transactions fail

This remains one of the big issues with the Lightning Network at present –  around one-third of transactions fail because the selected route is incapable of transmitting them.

The larger the payment, the more likely it is to fail.

The good news is that multi path payments are on the way – these allow multiple channels to be used together which enables larger payments to be split into smaller chunks.

On December 21, Blockstream released “C-Lightning v 0.8” which allows sending of multi path payments, however, the devs are still reportedly working on the functionality to receive payments.

‘Wumbo” channels are also in the works, which would not be subject to the current 0.167 BTC channel limit. 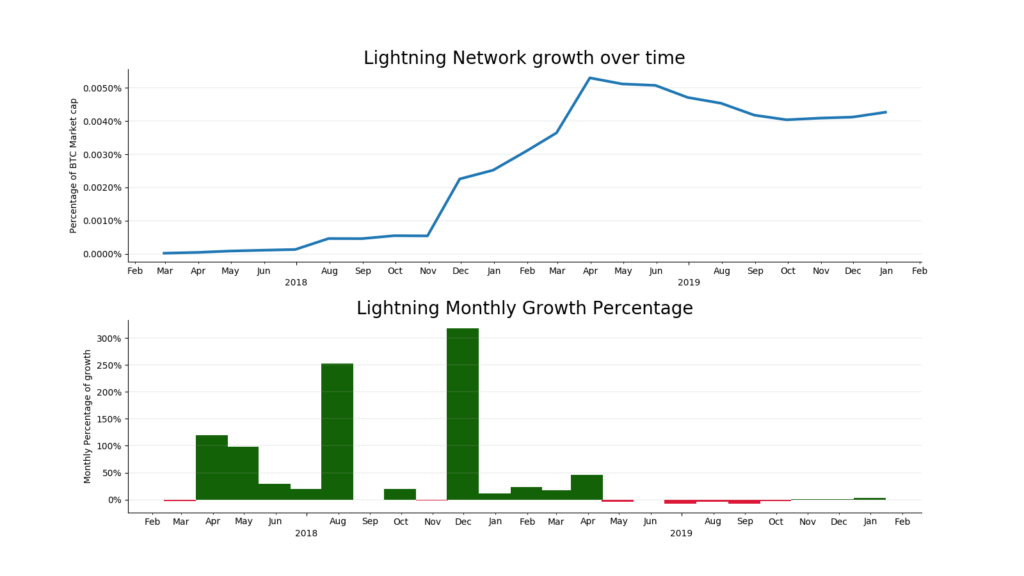 The Lightning Network has a huge amount of potential to help solve Bitcoin’s scaling problem.

By the end of December TXStats.com indicated there were 36,335 public channels containing 871 Bitcoin.

However, the number of channels and the amount of Bitcoin locked peaked in March last year – around the same time the last Lightning Torch highlighted the issues – and has flatlined around the 36K/800 BTC mark since July.

Samson Mow from Blockcstream says that the company estimates that around 40% of channels and overall capacity are private: “That means total LN capacity is 1218 BTC”. 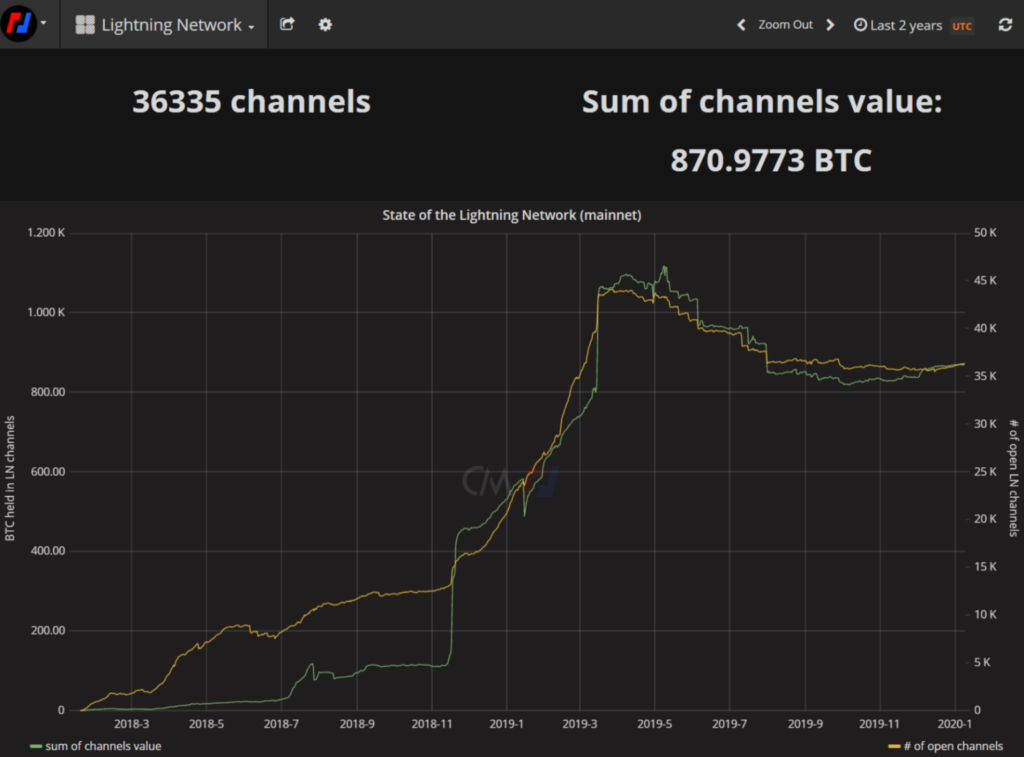 Other issues with the network:

A Bank of England study by Peter Zimmerman and Anantha Divakaruni of the University of Bergen criticised the Lightning Network as increasingly centralised and dominated by a handful of larger nodes.

That could be related to the fact the economic incentives of running a node don’t stack up.

Researchers from Hungary and Institute for Computer Science and Control published a report in November suggesting that LN is basically a charity case at present because it is “economically irrational for the majority of the large routing nodes who currently hold the network together.”

Most transactions until now have only paid around 10% of the costs of their routing.

A recent BitMEX report found there have been more than 60,000 ‘non-cooperative channel closures. That’s where a channel decides to leave and gets back its holdings.

That’s roughly double what the researchers expected to find. They said it may indicate that “experimentation with mobile lighting wallets may be more common that many expected”.

“The fact that non-cooperative closures are more common than many thought, means the privacy and scalability benefits of lightning are lower than many expected too,” the report stated.

The network has also suffered from security issues, with developers in September warning users they could lose all their Bitcoin on Lightning due to a bug/exploit.

More recently researchers at Florida International University have demonstrated how Lightning is the perfect breeding ground for malware botnets – leaving the Bitcoin locked on the network potentially vulnerable.