In a shocking turn of events this month, Wirecard has sparked the attention of the entire financial sector.

As the central banks try to stimulate the economy, it looks like this German financial services company has taken the world spotlight.

Wirecard shares started to plummet beginning June 18, as it went down more than 60% due to auditors unable to track the missing $2.1 billion [AU$3.1 billion] on its balance sheet.

Wirecard in absolute freefall for the 2nd day running:

To make matters worse, two banks from the Philippines were also affected in the process and CNBC has reported that the Wirecard CEO Markus Braun has also stepped down due to the accounting fraud scandal.

The confusion escalated the following day after the stock price went downhill.

On June 19, BDO Unibank Inc., and the Bank of the Philippine Islands (BPI) said that Wirecard isn’t a client. According to BDO Unibank CEO Nestor Tan in a mobile phone message reported by Bloomberg:

“It was a rogue employee who falsified documents and forged the signatures of our officers […] Wirecard is not even a depositor — we have no relationship with them.”

However, CNN Philippines reported that the marketing officer of BDO Unibank has been terminated amid the fraud investigation.

Another document presented by a representative of Ernst & Young showed a link between Wirecard and BPI which was reported bogus later on. In addition, it could also be a part of an attempted fraud according to BPI president Cezar Consing in a phone interview.

In addition, in a tweet from Warren de Guzman, a Filipino newscaster from ANC reported that Governor Benjamin Diokno of the Philippine Central Bank claimed that none of the missing $2.1 billion ever touched Philippine territory.

BSP Gov. Benjamin Diokno on Wirecard:
None of the missing $2.1B of German firm Wirecard entered the Philippine financial system. The international financial scandal used the names of two of the country’s biggest banks, BDO & BPI, in an attempt to cover the perpetrators’ track.

Fraud, stock manipulation, or both?

The Wirecard fiasco goes deeper when it was also observed that on June 19 that the stock also tried to recover as it closed 35% below compared to its massive drop to over 80%.

However, it is possible that Wirecard could pull off a “Hertz movement” since Hertz also had an unusual move after its stock price rose over 500% amid filing for bankruptcy.

Short term traders such as scalpers and swing traders could have taken advantage of the Wirecard situation last week as they had an opportunity to gain around 20-80% on the falling prices if they played their cards correctly. 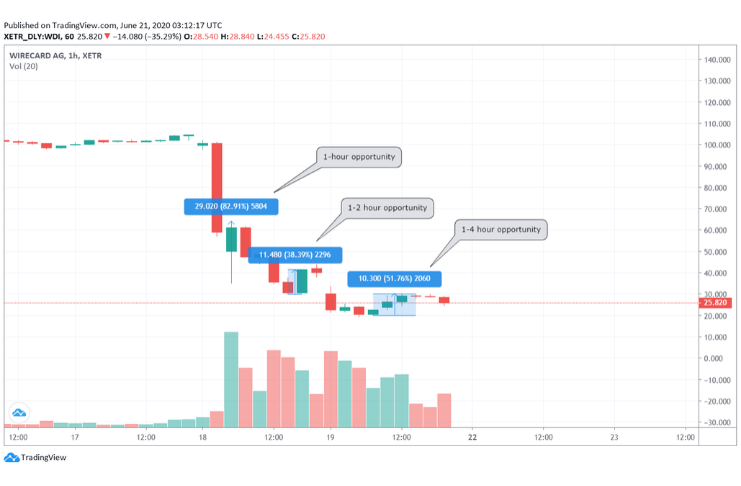 Aside from the CEO resigning, Wirecard also temporarily suspended its outgoing Chief Operating Officer Jan Marsalek until June 30. As per Bloomberg, the COO had tried to get in touch with the two Asian banks to recover the missing money but was unsuccessful.

Since Wirecard is “not a small fintech, but a DAX member” according to Bayaz, then Germany’s stock market could face more hurdles unless other sectors try to emerge amid this financial crisis.