The Corrupted Blood Incident is one of World of Warcraft’s most historical moments. It’s also helping researchers fight against the COVID-19 pandemic today.

Around 15 years ago, Blizzard had unwittingly unleashed a plague that would ravage the world of Azeroth and render most of its denizens, and the two million players of the game, powerless against it. This would hence be known as the “Corrupted Blood Incident” and has become an important research model for the novel coronavirus pandemic.

The Corrupted Blood was a World of Warcraft de-buff that was used during the Zul’Gurub raid in 2005, and it was a way to intentionally poison one’s blood, causing significant damage to the player over time. This de-buff was used against Hakkar the Soulflayer, the raid boss that used blood from the players to heal himself. 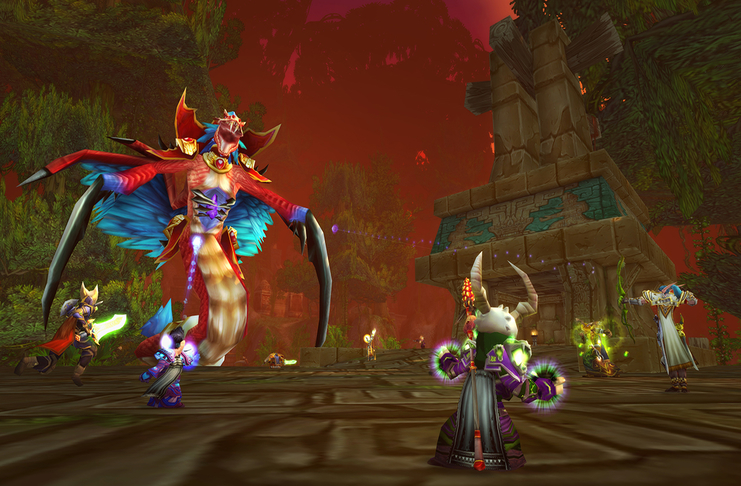 When Hakkar would drain the Corrupted Blood from the players, it would automatically cause him damage, which then opens up an opportunity for the boss to be killed. However, the Corrupted Blood was highly contagious and could be passed on to nearby allies.

The damage done is significant enough to kill lower-level players in a matter of seconds. However, its effects only last for a certain time and would eventually disappear.

The start of an epidemic

Blizzard had planned for the de-buffs effects to remain within the Zul’Gurub area. But an oversight on the developers’ part was that pets could keep any active de-buffs when they are dismissed and summoned again, a loophole that allowed the Corrupted Blood to spread throughout Azeroth, especially on the densely-populated in-game cities such as Ironforge.

Soon enough, low-level players began dying, and even non-playable characters (NPCs) could be infected with the plague. The epidemic became so severe that it managed to spread through three of World of Warcraft’s servers. While deaths in the game are certainly not permanent, it can cause quite a disadvantage for players.

The gameplay had been heavily affected as players steered clear from major towns and cities. The only players one would find in them were dead ones. In a matter of hours, cities like Stormwind and Ironforge were filled with corpses of humans, dwarves, and elves.

In many ways, the Corrupted Blood Incident mirrors the COVID-19 pandemic faced by the world today. Firstly, the plague was spread through mechanical transmission via animals, just like with the SARS-CoV-2 virus, which is believed to have come from bats.

The incident also had asymptomatic carriers in the form of NPCs who are unaffected by the plague but could pass it on to others. Players were observing social distancing from other players so that they don’t get the plague while the majority would isolate themselves far away from the cities where the plague was concentrated.

During the Corrupted Blood Incident, players were acting as though there was a real risk to their well-being. Others, however, also chose to risk themselves in order to satisfy their curiosities.

More than that, some of the countermeasures done by governments to contain the COVID-19 were also seen on the World of Warcraft epidemic. For instance, Blizzard had issued a voluntary quarantine in order to slow the spread of the plague. Some players with healing abilities took to the field to heal other players at the cost of their own safety, just like what the COVID-19 front-liners are doing today.

Those who weren’t powerful enough volunteered to help keep players away from infected areas. A big difference, though, is how Blizzard eradicated the plague. A week after the Corrupted Blood spread, Blizzard had no choice but to institute hard resets on the servers and with the novel coronavirus pandemic, that is beyond human capability.

After the incident, researchers quickly lauded it as a good research model, especially considering the real-world behavioral responses exhibited by the players. Epidemiologist Eric Lofgren even wrote a paper regarding the World of Warcraft Corrupted Blood Incident together with Nina Fefferman.

The two believed that the outbreak of the Corrupted Blood in Azeroth would provide an insight as to how people would react in the face of a pandemic.

“For me, it was a good illustration of how important it is to understand people’s behaviors. When people react to public health emergencies, how those reactions really shape the course of things. We often view epidemics as these things that sort of happen to people. There’s a virus and it’s doing things. But really it’s a virus that’s spreading between people, and how people interact, and behave and comply with authority figures, or don’t, those are all very important things,” Lofgren says in an interview with PC Gamer.

For Dr. Fefferman, she says that the work the research they had done on the Corrupted Blood Incident had proven to be invaluable, especially with the novel coronavirus pandemic. Both Lofgren and Fefferman are currently hard at work dealing with COVID-19.

Now, the Zul’Gurub raid is once again present in World of Warcraft Classic, but the Corrupted Blood will no longer plague Azeroth.

Zul'Gurub in #WowClassic is here! Check out our strategy and loot guides, as well as Blizzard's patch trailer for Rise of the Blood God:https://t.co/tQI9BMFoSQ pic.twitter.com/etsKYQ3800