Xiaomi has filed a patent application for a smartphone design that includes two pop-up cameras aimed at working as both rear and front-facing snapper.

Chinese giant Xiaomi has been working hard to get rid of notches and punch hole cameras. This is because they are developing a new smartphone feature—the dual pop-up camera.

Over a month ago, we saw that the company had patented a wild-looking rotating phone camera design where a module that holds all the cameras is placed on the back of the device.

Aside from that, it can also rotate all over, as to cover both the rear and selfie cameras. And since it is flexible, other photography techniques can also be applied. 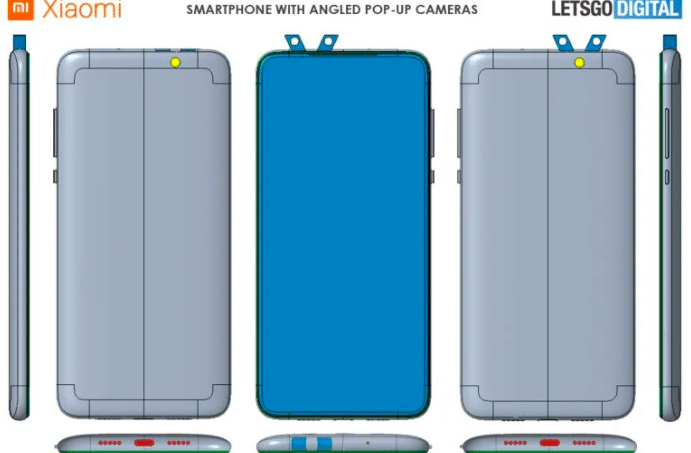 The new patent shows 16 renders of an all-screen smartphone with dual sharp-looking pop-up camera modules. The angled modules seem to hold two cameras each, one facing forward and the other backward. One is to believe that the forward-facing camera is for the selfie feature, and the other one is the rear, which will be the primary camera.

How Xiaomi would have managed to fit two cameras into such a cramped space is anyone’s guess, unless this smartphone gets made. There’s also a flash on the back of the phone, centered right under the pop-up modules.

The rest of the phone is fairly standard—a flat display with minimal bezels. It has a USB Type-C port on the bottom, and surrounding it is likely microphone and speaker grills.

The phone’s power and volume keys are on its right side. At the top, other than the dual pop-up camera modules, we can see either a sim card tray or an IR blaster, which are common on Xiaomi phones.

Another Patent from China tech giant

Xiaomi has launched a few smartphones in both the Redmi and Mi lineup, which features a pop-up mechanism for the selfie camera module. A recent patent filing shows a dual pop-up camera mechanism for both the front and rear cameras. It is not new since the Chinese tech giant already has experience releasing this kind.

More recently, Xiaomi gave us a peek of an actual existing smartphone with a hidden under-display camera, not just a patent.

The video demonstrates a phone that doesn’t have a visible selfie camera anywhere on display, yet, of course, the phone is capable of taking selfies. Where once there was a punch-hole camera interrupting the display, that selfie camera is now hidden under it.